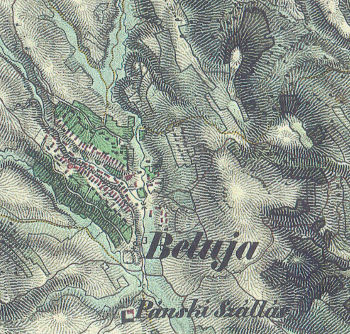 The village name Beluja, being the old Slavic name for Beluj was used, alongside the traditional Hungarian name Béld, until  the establishment of the Czechoslovak Republic in 1918. By the late 19th century, Beluja has experienced historically unprecedented rapid economic growth and has undergone significant social changes as an effect of modernisation.
For that very reason, the name of Beluja being directly related to economic and social well-being of the village, we do want to create a genuine bond between past and present. We want to build connections between the the true meaning of the word „Beluja“ and wide range of our patrimony-oriented and education-oriented activities.

It was in a very ancient times – over thousand years ago – that our ancestors settled down into this country. They left finds which are still and ocasionally coming up in the fields during ploughing. Stone axes from Stone Age and cinerary urns from Bronze Age have been excavated not far away from the village of Beluja. Several finds/artifacts/objects discovered or founded by the local people were usually reported to Andrej Kmet, a significant Slovak botanist, etnographer and archeologist (1841-1908). He was one of the first researchers who carried on modern archeological excavations in Central Europe. Thanks to Andrej Kmet, all collected archeological finds became nowadays a part of Slovak National Museum´s archaeology collection.

The Beluja was first mentioned in bishop of Esztergom´s charter (6th of July 1290). This was about the written authorisation to sell some land/property at the village of Beluja to Mikuláš, son of Hermann, a merchant from Banská Štiavnica for 300 talent of silver.

However, there are some earlier written records of other surrounding villages, which indicates an ancient settlement established in Beluja a long before the date for the given year 1290

Since 1342 the village of Beluja belonged to castle estate of Litava or to an estate of Čabrad.

Further information about our local history and informations on our tourist attractions will be successively completed.